Setting a Path for Decarbonization with the Commonwealth of Massachusetts

The Massachusetts Executive Office of Energy and Environmental Affairs (EEA) seeks to protect, preserve, and enhance the Commonwealth’s environmental resources while ensuring a clean energy future for the state’s residents.

The Commonwealth of Massachusetts is committed to achieving net zero greenhouse gas emissions by 2050. Massachusetts’ Executive Office of Energy and Environmental Affairs (EEA) leads implementation of this effort, as the office responsible for advancing the Commonwealth’s Global Warming Solutions Act (GWSA). Ahead of developing a 2030 Clean Energy and Climate Plan, as required under the GWSA, EEA sought to determine the ways in which Massachusetts can achieve net zero emissions while maintaining a healthy, equitable, and thriving economy. EEA developed a scope of work to determine the long-term pathways available for achieving this ambitious goal to ensure near-term decision-making was based on best available information.

To conduct this Decarbonization Roadmap Study, EEA engaged a team of technical experts led by Cadmus. To address EEA’s specific research needs, the Cadmus team utilized both an integrated, cross-sector energy system analysis and sector-specific analyses to identify the transformations necessary for Massachusetts to achieve its 2050 climate goals. The Cadmus team evaluated eight distinct economy-wide decarbonization pathways, as well as the transformations that are likely to drive emissions reductions in the transportation, building, energy, and non-energy sectors. The team also evaluated the economic and public health impacts associated with these changes, and the carbon sequestration capacity of natural and working lands in Massachusetts to achieve net zero emissions in 2050. Finally, Cadmus advised on the near-term climate actions necessary to achieve an interim emissions reduction by 2030 that is in line with net zero by mid-century. 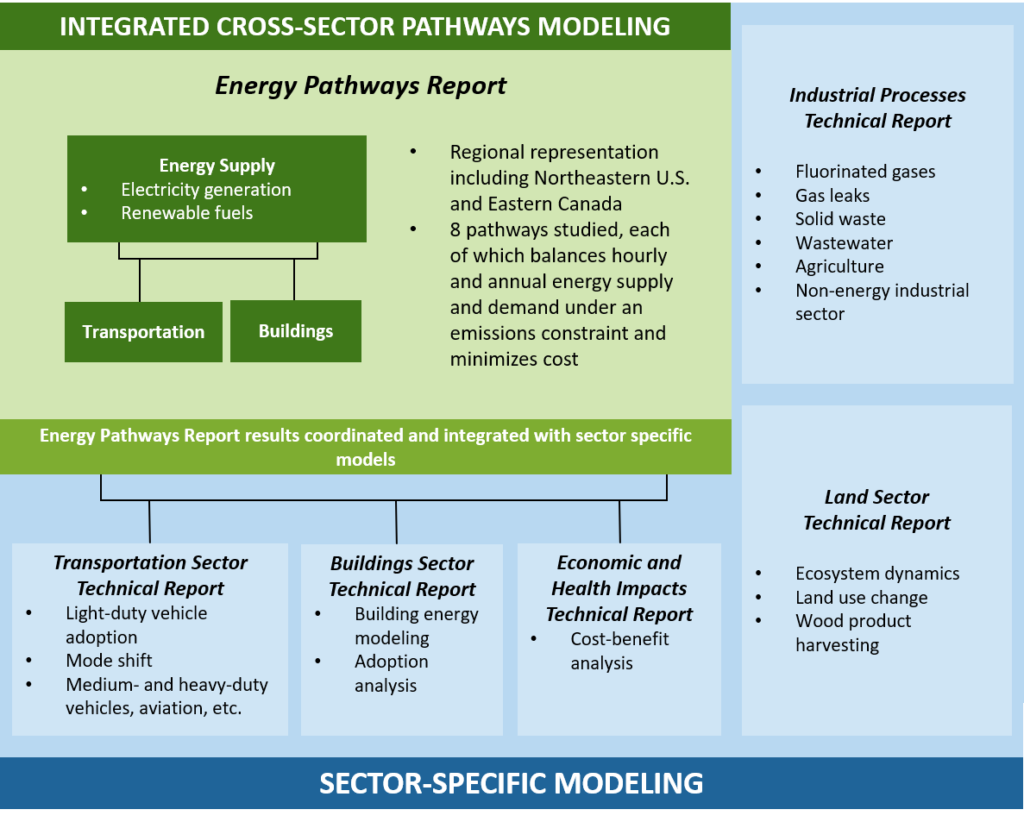 During each phase of the project, Cadmus worked with EEA to:

One of the unique challenges of this project was finding a manageable way to explore the complexity of economy-wide decarbonization given that fossil fuels power virtually every aspect of our economy and daily lives. The Cadmus team applied a systems engineering approach, which is based on the idea that in complex systems the parts cannot be easily separated from the whole without losing critical interactive effects that can fundamentally impact the overall findings. Instead of looking at decarbonization solutions one sector at a time, the Team integrated their findings from all sectors to look at the “big picture.” This approach allowed the Cadmus team to consider whether GHG reduction success in one sector could be at the expense of reductions somewhere else, or could be unsustainable systemwide, and also helped inform how to appropriately allocate resources in the near term to achieve economy-wide decarbonization in the long term.

The Cadmus team’s extensive cross-sector analysis identified potential reductions pathways to achieve the Commonwealth’s net zero goal, as well as the associated costs and benefits of each. The results are presented EEA’s final Massachusetts 2050 Decarbonization Roadmap, published in December 2020 along with the associated technical reports.

Figure 2: Four key “pillars of decarbonization” for the Commonwealth

Key findings indicate that the following must occur by 2050 to achieve net zero emissions:

Based on the key findings from the Roadmap, Cadmus supported EEA in developing the Interim Massachusetts 2030 Clean Energy and Climate Plan (CECP) which lays out priorities for achieving reductions in the building, transportation, energy and non-energy sectors this decade, along with enhancing carbon sequestration on natural and working lands. EEA is currently refining the CECP to incorporate updates from An Act Creating a Next Generation Roadmap for Massachusetts, signed by Governor Baker in March 2021, and will release a final version later this year that achieves a 50% emissions reduction this decade.

Learn more about how Cadmus can help you discover and achieve extraordinary results.